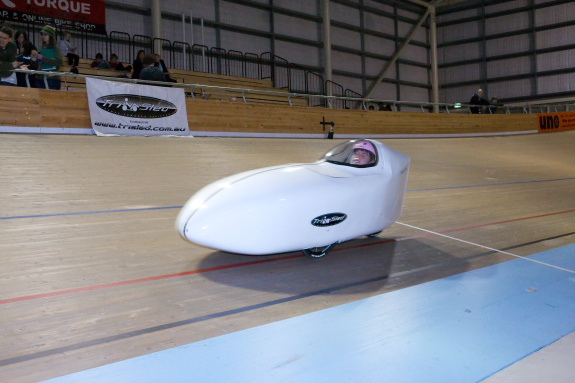 When the Trisled team began our path towards streamlined tricycle record attempts in 2008, we didn’t realise it would lead to a new era of record setting. But in just two years of attempts, our streamlined tricycles have cracked four Australian human powered land speed records and three world records. And for the first time in HPV history, not one but two prestigious world records have been taken back from a speed bike by a modified velomobile.

Not only has Trisled added a new twist to world endurance speed records, but we have proven that a fast vehicle can still be a practical road-going machine.

Trisled’s R&D priority is developing practical real world outcomes. Our two record-setting streamlined tricycles, Overzealous and a lil Overzealous have been developed to explore the upper limits of this format. Based on the Sorcerer II HPV, these vehicles were purpose-built for specific record attempts. Data collected from these attempts will be used to further the development of fast, lightweight and practical commuter vehicles.

Following the success of our experimental machine Overzealous, the Trisled development team became increasingly interested in exploring the upper limits of streamlined tricycles.

Power and speed data suggested that Overzealous was in the ballpark of speed bike efficiency, and not too far away from the realm of a practical road-going machine. While Overzealous was good, further reductions in frontal area and weight could be achieved. A lil Overzealous is the realisation of that goal.

While Overzealous is already light (21.6kg), a lil overzealous is even lighter, weighing just 17.3 kg. It is also significantly smaller, with 80mm shaved from its width and 20mm from its height. And it isn’t just carbon keeping the weight down.

Fifteen years of HPV racing has taught the Trisled team a thing or two about building vehicles light. Combined with a vacuum-infused shell produced by our in-house composites guru Ken Houghton, a lil Overzealous is one of the lightest vehicles of its kind developed in the world.

From Speed Bikes to Speed Trikes

Trisled designer, Ben Goodall, had been following the progress of the 24-hour solo record for some time and observed the methods used by successful attempts.

All previous attempts had been undertaken in two wheeled streamlined bicycles. In discussion with rider Jeff Nielsen and the rest of the development team, Ben had developed a theory. During the SledEdge speed bike project , the team observed that Jeff’s heart rate was higher in the speed bike than a streamlined trike with the same power output. Ben believed that this could be due to the mental anxiety of launching, catching and balancing the machine.

While it was difficult to get an exact figure on it, he believed that it was bound to be more than the efficiency loss of having a third wheel on the ground. If all other aspects of the machine such as frontal area and weight were optimised then the vehicle should be efficient enough in the 50km/h range to set a 24-hour record (this is in fact the speed Jeff averaged during the 24 hour attempt!).

And as for passion, Ben’s comes close to Jeff’s! He believes that breaking the 24-hour record has been one of the most rewarding moments in his HPV-building career: ‘Nothing brings me more pleasure than seeing a machine I designed reaching its full potential. I went into this attempt feeling confident about the vehicle’s performance. Jeff’s performance completely blew my mind! I have never seen anything like it!’

There were several design challenges in making the sizable reductions in size and performance required to make a lil Overzealous, the biggest of which was that there was limited room around the front end of the machine. At 540mm front track width in Overzealous, this vehicle was already stretched for room between the handlebars for Jeff’s legs.

To overcome this problem, an integrated wheel guard and handlebar was devised for a lil Overzealous (pictured below) , the result being that the front wheel could only be 15mm from the rider’s leg without any fear of interference. This solution paved the way for a new shell to be constructed a massive 13 per cent smaller! Other changes included the elimination of the adjustable seat and front brakes to save weight.

In the Trisled Fresh Racing Team, Jeff Nielsen is described as ‘the freak show’. However, he is neither an Olympian nor a professional athlete. The person who has now traveled further than any other person in the world using only his own power is simply a very driven and fit individual. While very few of us can realistically expect to top Jeff’s incredible performance, he is a testimony to what an ‘ordinary’ person can achieve if they put their mind and passion into something they really want. Perhaps more significantly, he is an example of what is possible with human power.

The major driving force for the development of a lil Overzealous was Jeff, who put long days and nights into cutting and shutting the smaller pattern over the 2009-10 Christmas break, with the help of his friend and colleague Mikey, and Ben and Gareth from Trisled. Following his successful Australian land speed record and world trike hour record during Easter 2009, Jeff was more determined than ever to go for his long time goal of setting a world 24-hour distance record. Jeff spent huge amounts of time working on his fueling and hydration strategies, as well as his training methods. His success was as much about these smaller details as it was about fitness.

One of the toughest challenges in any long distance record is keeping the rider ‘fed and watered’. Using their HPV racing experience, the team devised an innovative strategy known as the ‘bottle pass’, where a rider got up to speed with Jeff using the Aquila racing HPV , and passed provisions through the hatch. Check out the You Tube footage showing the bottle changes. Jeff kept a mobile phone on his ‘dashboard’, where he called the team to put in his order (and have a general chat). This strategy was so successful that Jeff didn’t stop for the first 12 hours! And as for disposing of the fluids, Jeff used a colostomy bag, which, after a few hours of stage fright, he managed to operate smoothly for the remainder of the attempt.

Jeff’s passion and motivation was personal. In his mid teens, Jeff lost his mother to heart disease, and shortly after his father died of cancer. Jeff channeled this energy towards his record attempts and, for his 24-hour attempt, he pledged his support to the Heart Foundation, raising over $3000 for this worthy cause.

Jeff describes his motivation on his website, Pedal For Heart: ‘I want everyone to see me attempt this record in the hope that they might think: “wow, the human body is amazing and it can achieve so much”, and to think to themselves, “what am I doing to stay fit and healthy?” I want everyone to read and hear about my life and make the effort to know the warning signs of cardiovascular disease and to make the effort to not becoming another victim to this killer.’

Often the glory goes to one or two people when a record is broken, but in fact these records would not have been possible without the many ‘behind the scenes’ supporters working away, often into the wee hours of the morning. In fact, so many people have been involved in Trisled’s Overzealous and a lil Overzealous record attempts in the last two years that it would be impossible to list them all here! Nonetheless, we’ve made our best attempt at acknowledging our supporters below. 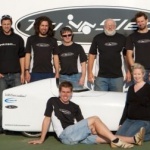 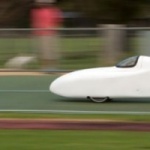 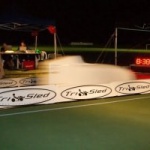 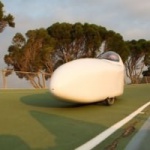 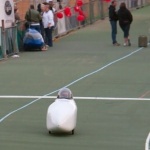 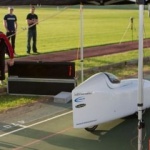 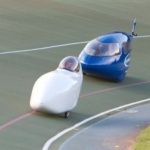 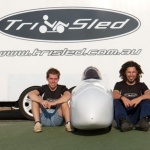 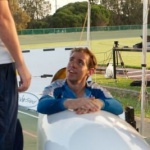 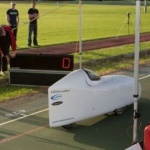 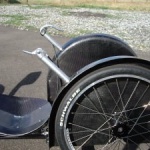 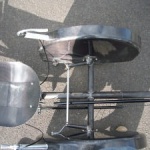 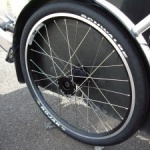 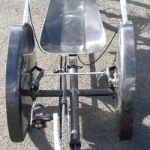 Bottle change for Jeff during his 24-hour record attempt. 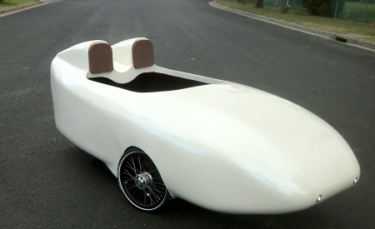 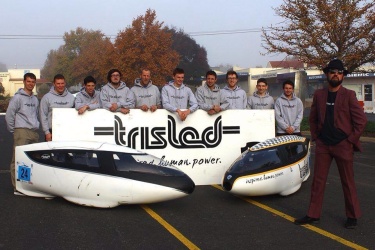